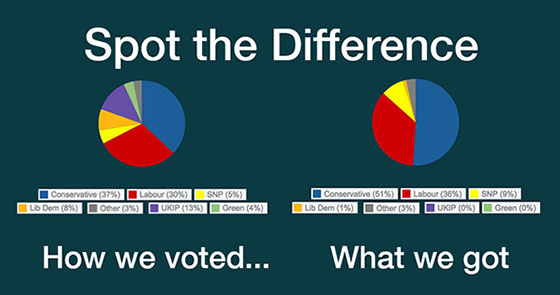 Our Parliament is woefully unrepresentative of the democratic wishes of the citizens it governs. Votes need to matter, it’s time for something new to replace First Past The Post.

Elections to the House of Commons use the First Past The Post system - a system which is demonstrably unrepresentative and helps fuel the sense amongst the electoral that their votes don’t count.

Each election we are told that the overall result will be decided not by the entire country, but by a small number of so-called “marginal seats”. Parties pour their resources into these seats rather than trying hard to win the vote of every person.

Since the EU referendum there have been reports of Leave voters expressing their disappointment at the result, claiming they didn’t think their vote would count - they’re used to voting and seeing no difference in the outcome, thanks to FPTP.

Something New’s manifesto commits to a proportional system for general elections so we’re happy to support the Electoral Reform Society and Unlock Democracy in their call to Make Seats Match Votes.