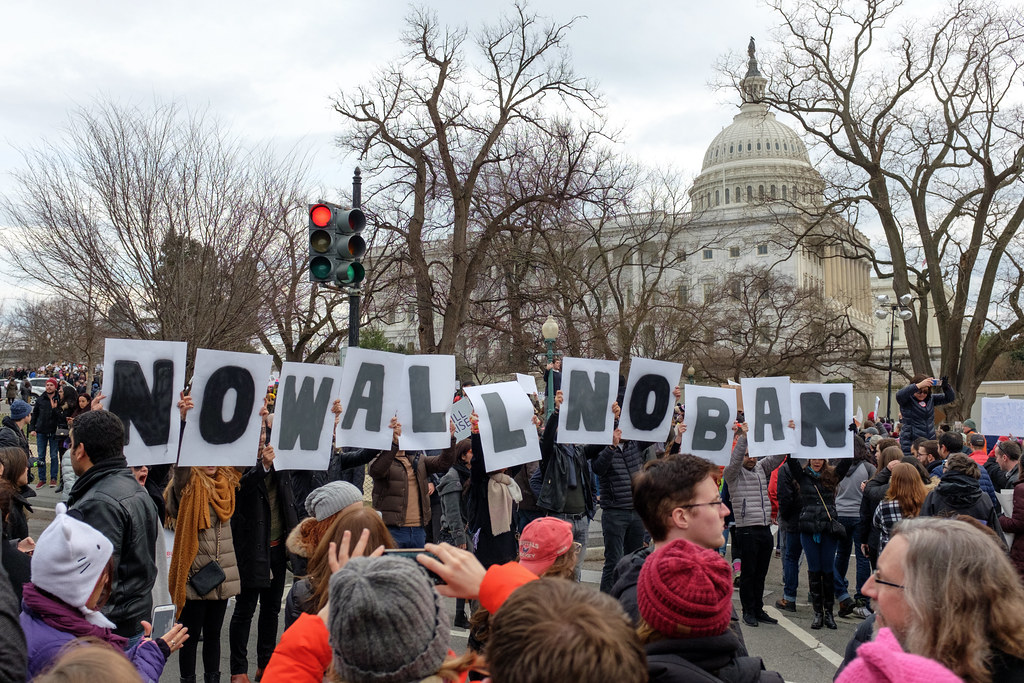 We are deeply opposed to the executive order issued by President Trump, the thinking behind it, and the failure of our Prime Minster to take leadership in condemning it. Representatives of Something New, Pirate Party UK, the Transhumanist Party, and Rebooting Democracy have come together to publish an open letter condemning the recent actions of both leaders, and are inviting more officials from minor parties to join them.

At Something New, not only do we fundamentally disagree with the idea of banning entire nations’ citizens on spurious grounds and suspending the entire US refugee programme, we find our government’s appeasement of the Trump administration appalling.

Our party leader, James Smith, has authored a letter condemning Trump’s actions, and has invited representatives of minor political parties in the UK to join him. If the leader of our country will not show leadership, then we will.

We, the undersigned, condemn President Donald Trump’s illiberal actions since his inauguration, in particular in banning citizens from seven nations from entering the USA, and call on Prime Minister Theresa May to join us in doing so.

Modern British values of tolerance, compassion, and understanding mean that we do not discriminate against other humans on the basis of their nationality, religion, race, gender, or any other perceived differentiator.

We also do not appease those who do discriminate, and who would roll back the progressive values that make our modern liberal democracies what they are.

Theresa May must make it clear that the British people, who have fought nationalism and prejudice before, will do so again, and that those in need will always be welcome in our country.

The signatories include representatives of:

Full details of the signatories can be found on the master document.

The executive order suspends the US refugee programme for 120 days, and bans citizens of 7 countries from entering the US for 90 days. It affects Somalians, Sudanese, Iraqis, Iranians, Yemenis, Syrians and Libyans. It includes legal residents of the United States, and on people of dual nationality.

This ban is illogical, indiscriminate, and wrong, and, combined with the suspension of the refugee programme, disastrous. We are opposed wholly to the idea that banning citizens of these countries will help the United States or the terrorist situation in any way. In fact, it is more likely to act as an incentive for Muslims in the region to adopt a more anti-Western stance, even to align themselves with forces such as Al Nusra, Al Qaeda or ISIS.

It is hugely counter-productive, and it reinforces the idea, expressed more than once, that Trump is ‘ISIS’s best recruiting sergeant’. Naturally, then, you would think that the British government would be one of the first to protest to protest the decision - the decision that would affect Sir Mo Farah, Conservative MP Nadhim Zahawi, and many others besides. But, alas, it was not.

Theresa May initially refused to condemn the ban when questioned repeatedly on it. She later said “We do not agree with this kind of approach and it is not one we will be taking.” She added that she would appeal to the United States if it became clear it affected British citizens, despite, at that point, it being apparent that it did. In fact, it has been estimated that more than 250,000 Britons are affected by the ban.

Meanwhile, world leaders such as Canada’s Justin Trudeau, France’s Francois Hollande, and Germany’s Angela Merkel all took far stronger stances. We must do the same.

Contact James via email or Twitter if you have any queries about the letter, or wish to become a signatory.