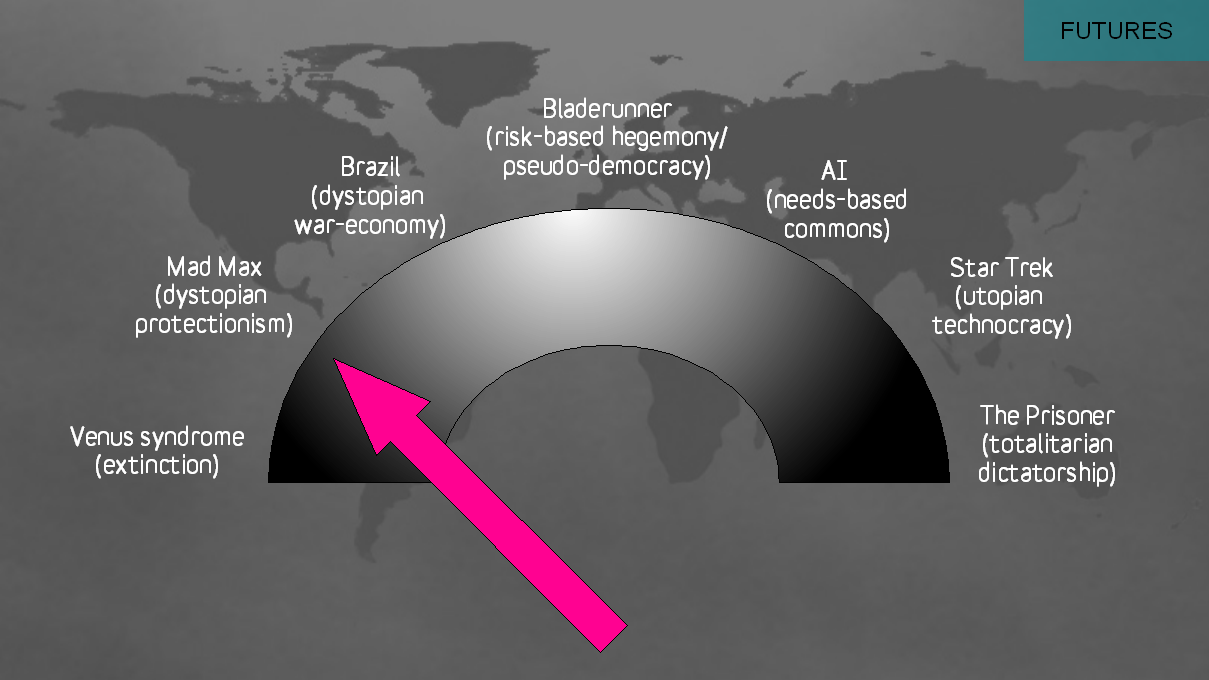 Where are we going? What future are we heading for?

My boss in my day job, Gavin, has a great question he poses sometimes; which movie future do you want to end up in?

Personally, my favourite future has to be the Culture, from the series of books by Iain M Banks. The society is a shamelessly utopian one. The human occupants have all their needs met by automation, and spend their time in any way they please.

In that everyone benefits from this equally, it’s a communist society, but it’s post-scarcity communism, where everyone lives in luxury.

I wanted to see [them] fill their pants when they realized that the future is - in Earth terms - bright, bright red.

This idea has surfaced outside science fiction recently in the idea of “Fully Automated Luxury Communism”. What is the point of human progress unless we try to make sure everyone has everything they need, and is free to pursue their dreams?

Obviously this is a long way off, but that’s the direction I’d like us to be heading, and one of the problems I have with our political system is that it doesn’t seem to think about the future enough. However, outside traditional politics, some of the ideas are starting to come together.

There are experiments appearing across the world in Universal Basic Income. This is where every citizen receives a fixed income from the state, and supplements it with their job income. The simplest reason for this is that it simplifies benefit payments, and thus provides a universal safety net for society, but there more interesting reasons too.

In a world where technology is changing the way we work, this is a really useful concept. Uber, for instance, is changing the way shared transport works, but it’s doing so by removing all job security from its drivers (amongst other terrible things). If those drivers had a universal basic income, this would be less of a concern perhaps.

This extreme free-market zealot of a company should be campaigning for the progressive ideal of Universal Basic Income, because otherwise its drivers cannot survive.

We also see this in new ideas like colony.io, where people form distributed autonomous organisations and sell their work piecemeal. Job security doesn’t exist, but the model does unleash new possibilities for the future.

Basic Income is an essential safety net not only for people, but for our economy in a future of atomised work. This is becoming obvious to some, to the extent that Silicon Valley venture capitalists Y Combinator are investing in a long-term research project on basic income.

This isn’t a normal combination, but it shows that our future political decisions won’t be on the traditional left-right spectrum, but instead fusing ideas from both and moving forward.

Now add in that our society is becoming increasingly automated. How do we deal with that? We’ve thought for years that we’d be working less in the future, and that’s definitely not happened yet, but we’re sure to get there at some point.

How does industrial-era politics handle this? What do trades unions do, for instance? Do they fight against the automation of the world and the destruction of jobs, or do they help manage the transition? Dotcomrades is a really interesting group which I hope can help unions to work some of this out and move forward into the future.

For me, these ideas are an essential step towards our long-term goal of becoming a successful utopia, which is why Basic Income research is part of Something New’s manifesto.

Something New is all about engaging with this kind of future politically, working out how we get to somewhere better without getting locked down in political games, and working out how we can use our new-found technological powers to benefit everyone. If you want to help build that vision, get involved.